My Interest in Immigration Issues

In mid 2017, I was drawn to care for a Guatemalan teenager, ultimately becoming his legal guardian and helping him move toward college and a Green Card. I also became involved in Vecinos Seguros, a local organization that tries to bring safety and support to the undocumented Central Americans who live precariously in our midst.

Though I haven't been an activist for several decades, I'm the daughter of refugees, born a couple of weeks after they arrived on these shores. As I learned English in my neighborhood and school, I became my parent's first "American child," assigned to interpret the often incomprehensible American world about them.

Looking at my writing, I see how two novels, The Flood and A Call From Spooner Street, a memoir, Afterimages, and my most recent nonfiction book, A Chance for Land and Fresh Air, all explore the trauma and conflicts of immigration. Though I feel very American, my heart is deeply touched by the hopes and resilience of immigrants.

In the last decades of the nineteenth century, five million Jews were confined to the Pale of Settlement, an area lying between the Baltic and the Black Sea on Russia's western border. In an autocratic society with widespread poverty, life for Jews in the Pale was particularly harsh: severe quotas restricted their entry into universities and the professions, Jewish men were subject to conscription starting at age 12 and lasting as long as 25 years; and, in a society that remained largely agricultural, they were forbidden to farm or own land and were limited largely to what Russians called "parasitical occupations" like money-lending and peddling.

The assassination of Czar Alexander in 1880, which was blamed on Jews, began several decades of periodic pogroms that sent two million Russian Jews fleeing the Pale, 1.7 million making their way across Europe to ships offering steerage to the United States.

Although America was not entirely welcoming, these refugees filled the tenements of eastern seaboard cities like New York, New Haven, Philadelphia, and Baltimore. Though tuberculosis was widespread in the sweat shops where the immigrants found work, they generally felt physically safe.

Baron Maurice de Hirsch, a wealthy Belgian Jewish philanthropist, viewed emigration and farming as the solution to Russian anti-Semitism. Since Baron Edmond de Rothschild was sponsoring Jewish cooperative farms in Palestine, de Hirsch gave a good deal of his wealth to help Jews become farmers in Argentina and the US.  He funded the Jewish Agricultural and Industrial Aid Society, located on the Lower East Side of Manhattan, which provided loans to Jews to purchase farmland in every state and Canada and offered a range of supports to ensure that, despite no experience as farmers, Jews would make a success of farming in America.

Although Sharon's Russian Jewish immigrants were isolated from Sharon's village life by geography, language and culture, they were often more connected to both other Jewish farm communities and urban Jews than were their gentile neighbors. The JAIAS linked them to the Jewish farmers across Connecticut and helped them form a farming association that provided farm credit, a model later imitated by the federal government. Jewish farmers across Connecticut and New York also supplemented their farm income by offering "kosher vacations" to Jews from New York City, Hartford and New Haven, thus building a commonality of opinion built between urban and rural Jews, which was enriched by The Forward, a left-leaning Yiddish newspaper with an Orthodox orientation, read regularly by both urban Russian Jews and Russian Jewish farmers.

As the warm drums grew louder across the U.S., simmering anti-immigrant sentiment was directed at recent newcomers from Russia, as well as Germany and the Austro-Hungarian Empire, the latter both Axis powers. Although Sharon's Jewish farmers were tolerated as long as they kept to themselves, their children attending one-room schools. But, in 1916, when the first Jewish farm family tried to bring their daughter to Sharon High School, she was turned away.

On April 2nd, 1917, two-and-a-half years into the war in Europe, President Woodrow Wilson declared war against Germany, Austro-Hungary and the Ottoman Empire; the United States would be allied with England, Russia, and Italy. Just as the immigrant Irish maids who had settled in Sharon Valley hoped aloud that the Kaiser would prevail over the Brits, memories of Czarist Russia were raw among Sharon's Jewish immigrants.  As the Forward's editor had wrote, "All civilized people [must] sympathize with Germany.  Every victory she attains over Russia is a source of joy."

Fear of the financial and military costs of war was widespread among all Americans. Although Sharon's Jewish farmers went quietly about their business, New York Jews were the most vocal ethnic group in their anti-war sentiments. To generate support for an overseas war, the Committee on Public Information put up pro-war flyers and harassed dissenters. At the same time, the FBI developed a liaison with the conservative businessmen's organization, the American Protective League, to monitor dissent throughout the United States. And the Espionage Act, passed by Congress in 1917, and the Sedition Act passed in 1918, both aimed to stifle dissent and anti-war protests.

World War I was the first time America used a draft to create its military. Although immigrants from Germany and Austro-Hungary who had not been naturalized were declared "enemy aliens," and so ineligible for the draft, Russian Jewish immigrants were eligible, whether or not they were naturalized. Despite their memories of persecution under the czar and the disasters of Russian conscription, Russian Jewish draftees generally responded positively. Indeed, the Forward argued that, whatever one's criticisms of the war, it was the duty of a citizen to obey the law, and many Jews waived their right of exemption to serve in the military.

Of an estimated 3.4 million Jews living in the country during the First World War, 250,000 joined the military, according to the American Jewish Committee's Office of Jewish War Records. It was the first time Jews had fought in significant numbers for the American armed forces. In New York City's Seventy-Seventh Division, comprised largely of immigrants, a song mocking the rhetoric of war boosters, ended with, "Oh, the army, the army, the democratic army! All the Jews and Wops, the Dutch and Irish Cops! They're in the army now!"

Though barracks at Camp Upton on Long Island were still being built, Russian Jews were astonished by livable conditions created for soldiers, as well as by the attempt to find rabbis for the draftees and even the right of Orthodox Jews to go on furlough for the High Holidays.  Camp Upton may sound like a multi-ethnic utopia, but it did not include either officers, who were billeted more comfortably, or African American draftees who were kept in separate, likely less adequate quarters.

Sharon's farmers had bought their land as recent immigrants with young or no children; in 1917, most of their sons were still not of draft age. Yet of Sharon's thirty Jewish farm families, Morris Cohen and Hyman Paley are listed on the village's World War I memorial.

Two events in 1917 shifted the anti-war attitude of Russian Jewish immigrants. The first was the Russian Revolution: in March, the czar abdicated his throne and a provisional government called for a negotiated peace; in November, the Bolsheviks assumed power, promising peace, land, bread, and sovereignty for all oppressed peoples, and unilaterally ceased hostilities against Germany.

Ironically, while the fledgling Soviet Union turned Russia into an acceptable ally for Russian Jewish immigrants, the Bolsheviks frightened the middle classes in the United States and in Western Europe, who worried that revolution might spread. Misunderstanding the relief Jews experienced in the downfall of the czar and the new government's promise of full human rights for all Soviet citizens, the middle class tended to see Jews as soft on communism and unreliable Americans.

Since the end of the nineteenth century, Zionism had drawn an increasing constituency among Jews worldwide; moreover, a small but growing number of urban Jews and Jewish farmers had family or friends who had fled the Pale for Palestine.

Ottoman Palestine was an axis power, which meant that Jews might be called to fight their own people.  Thus, the second event that softened the anti-war sentiment of Russian Jews was the Balfour Declaration in November 1917, in which Britain declared its intention to establish a national Jewish home in Palestine, and so claimed Palestine's future as part of the Allied nations.

Although The Forward took a dim view of the Balfour Declaration, arguing that most Jews in America were happy where they were, Russian Jews were generally attached to their Biblical home land, even if they intended to remain in America, they usually had high hopes for a possible Jewish nation.

Jewish activism in the resistance to World War I, Jews' warmth toward the Russian Revolution, and Jews' involvement in the future of Palestine all fueled the suspicion that Jews were unreliable American citizens. Though some of this mistrust was no more than anti-Semitism, Jewish immigrants were often more international in their loyalties and concerns than were those of other Americans. Many Russian Jews became involved in the humanitarian side of the war, sending packages to destitute and brutalized Jews in war-torn Russia and Central Europe, and to starving Jews in Ottoman-controlled Palestine.

As the nativism of the 1920s, with its passage of stringent anti-immigration laws, would make clear, neither farming nor taking up arms for the United States made Jews social, cultural or political equals.  But the War gave Russian and Central European Jews the courage to express their political convictions, and their activism during World War I expanded the terms of American democracy and helped protect Jews from the backlash of the postwar years. 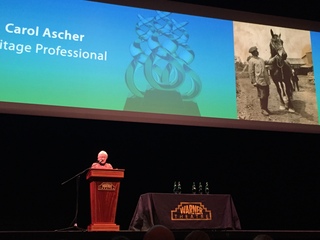 Carol at the CutlureMAX Awards

Carol is the recipient of the CultureMax Heritage Professional Award from the Northwest Connecticut Arts Council for her exhibit, "A Chance for Land and Fresh Air" at The Sharon Historical Society. See more about the project and the book of the same name at the www.achanceforlandandfreshair.com.

The award was presented on Tuesday, November 13, 2018 at the Warner Theatre.