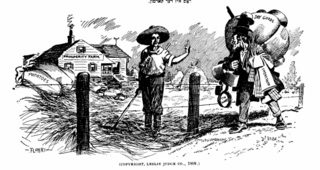 As my research for A Chance for Land and Fresh Air cleared, a complicated series of circumstance had created a Russian Jewish farming settlement in the hills of Sharon, Connecticut.

Forbidden to own land or farm in the Russian Pale of Settlement, Jews had been confined to "unproductive" professions, which had exacerbated anti-Semitism. In response, young Russian Jews dreamed of farming—some in Palestine, and others in the Americas.  Inspired by the terrible situation of Russian Jews, Baron Maurice de Hirsch, a wealthy Belgian Jewish philanthropist, supported early Jewish farm settlements in the US and Argentina.  In 1900, the Jewish Agricultural and Industrial Aid Society (JAIAS) was established on Manhattan's Lower East Side with money from de Hirsch's estate to offer Jews loans for mortgages and farm implements, as well as the necessary information and supports needed by Jews who had never farmed succeed at farming.

Sharon was on the New York Central train line, a ride from New York not much longer than the two-and-a-half hours it takes today. Moreover, a number of farms were for sale in the stony hills above Sharon.  The new immigrants could stay in touch with the City's vibrant Jewish immigrant community—and, when they needed to subsidize their farm incomes, offer kosher vacations to New York Jews. Indeed, a good percentage of the JAIAS grants were for farms in New York, Connecticut, Massachusetts and New Jersey, all within a few hours of the Lower East Side, and most of the farmers offered kosher resorts and farm vacations.

As I worked on the exhibit and the book, I met people who grew up in JAIAS-funded farming communities as far away as Saskatchewan, and Iowa.  Though I was charmed by their family stories, my mental image of the Jewish farming movement remained centered on the East Coast.

Yet recently my dear friend Marnie Mueller announced that her great grandmother, Annie Kahan, had homesteaded in North Dakota, with expenses for clothing and food, and perhaps for seed and farming equipment, paid for by Baron de Hirsch. Whereas Jews in the east bought land that had already been farmed—and was often over-farmed—at the end of the nineteenth century North Dakota remained so unsettled by Europeans that the US government gave 160 acres to any European who stayed on the land for at least five years.

In 1968, the Washington State Jewish Archives at the University of Washington in Seattle conducted an interview with Annie Kahan's daughter, Marnie's grandmother, Sarah Siegel, who was eighty-three at the time. (If you want to hear Sarah's story, told in her lovely elegant voice, CLICK HERE.

The Archive describes the interview as follows.

Sarah Siegel was born in St. Paul in 1885. Her father, Louis Kahan, had emigrated from Poland in 1881 or 1882 to St. Paul, Minnesota where he repaired and rented houses to earn enough money to bring his family to the United States. In 1886, the family moved to North Dakota and settled on a 160-acre homestead just 10 miles from Devil's Lake, a colony funded by Baron de Hirsch. In addition to his farming activities, Mr. Kahan was responsible for the distribution of clothing and food sent by Mr. de Hirsch.

Mrs. Siegel relates how blizzards, grasshoppers and spring frosts hampered farming efforts. She describes the relationship that existed between the sharecroppers and the overseers from Devil's Lake, and briefly describes the Jewish Orthodox services there. In 1891 the family moved to Seattle, where they first opened a clothing store and then a trunk and suitcase factory. Mrs. Siegel discusses her father's writings on religion and his philosophy on religious unity. She also mentions other Seattle families who may have been at Devil's Lake -- the Shapiros, Julius Friedman and the Cohens.

At least 800 Jewish individuals filed for land between 1880 and 1916. They generally settled in clusters. Many [after 1900] were aided by the Jewish Agricultural and Industrial Aid Society. In addition several of the earliest settlements, Painted Woods and Devils Lake, were aided by synagogues located in Minnesota's Twin Cities. Homesteaders endured great hardships such as plagues of grasshoppers, prairie fires, blizzards and drought. Most left after acquiring full land title (generally five years). A number settled in market towns along the two railroads that crossed the state and where they operated general stores.

By 1889 the country's growing railroad industry lured people to the eastern community of Grand Forks. A permanent congregation was established in 1892. It was from the pulpit of B'nai Israel Synagogue that President William McKinley urged the Jews to participate in the war with Spain. The city of Fargo also grew near the turn of the century and by 1896 a synagogue was chartered there. The Jews of North Dakota were engaged mainly in retailing. A few, such as Fargo Mayor Herschel Lashkowitz, and Federal Judge Myron Bright, distinguished themselves in politics.

A 1990 article by Janet E. Schulte in the Great Plains Quarterly offers more information on the 1200 Russian Jewish immigrants who homesteaded in North Dakota.

What remains unclear in all these sources is how much funding Baron de Hirsch was doing across the United States before the establishment of the Jewish Agricultural and Industrial Aid Society, which began with funds from his estate after his death.  If Sarah Siegel remembers correctly, in addition to assistance from synagogues in Minnesota, homesteaders may have been receiving help from de Hirsch as early as the 1880s.