Across the street from my childhood home 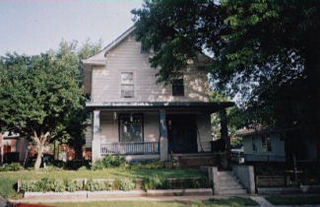 My childhood home in Topeka

Potwin Elementary School, replaced by a more modern building when I was in fourth grade 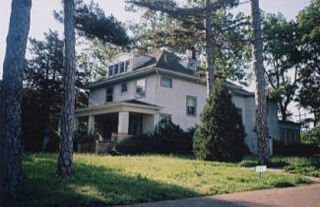 The old Menninger Sanitarium where my father worked 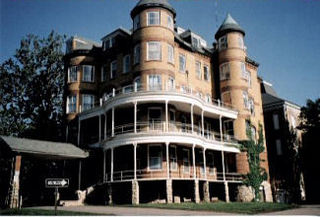 One of the old state hospital buildings where my father worked

Carol frequently writes on immigration in her column

I grew up in Topeka, Kansas, in two very different worlds. One was the optimistic, innocent, and good-spirited Christian world of my midwestern neighborhood and school. The other was the ironic, often dark Central European world of my parents and their friends, Jewish refugee psychoanalysts who had been hired by Karl and Will Menninger and were creating an internationally famous psychoanalytic sanitarium.

My mother had been unable to complete high school under the Nazis. After taking her high school exams, she took one course after another at Washburn College. "We Jews are not safe until everyone is safe," she would say, and she courageously joined Topeka's chapter of the NAACP, which in 1951 began building the landmark case, Brown v. Topeka Board of Education, a case that would rise to the Supreme Court in 1954.

My father had come of age in "Red Vienna. " Although Hitler's march into Vienna had stripped his family of their home and factory and ultimately killed my grandfather, my father remained an idealist who dreamed of a rational, egalitarian, and secular society. At the same time, my father was a European patriarch who wanted my mother to stay at home as a housewife, and he often worried that I was too bookish, articulate and sharp-tongued to find a husband. For years, the experiences of my parents and their generation of European Jews overwhelmed my apparently placid Kansas existence.  Nothing in my life seemed worthy of a story. Yet, discovering how words on paper clarified my thoughts, I did write.

My father died of a heart attack in 1965.  I had loved and revered him, despite his often cruel temper.  Three years later, when an early marriage ended, I felt the ground pulled out from beneath my feet. Graduate school promised a few years of safety in which I could rethink my life, and I entered Columbia University in a program that combined anthropology and education. Though the events of '68 had sullied the image of the university and the prize of an advanced degree, for the next few years, I divided my time between working for a Ph.D. and writing write poems, short stories and even a play. I began publishing in small literary magazines and earned a doctorate in 1974.

As protests against the war in Vietnam expanded to critiques of racial and gender inequities inside our own society, I began to write, and publish, personal essays--about soap operas, Tupperware parties, women's clothes, women's friendship, and even how women treated each other in academia, where I was coordinating an early women's studies program.

In 1978, I helped organize a Second Wave Conference in honor of Simone de Beauvoir. The Second Sex: Thirty Years Later, which drew speakers from all over the country, and filled a large hall at NYU with energized and lively women. Simone De Beauvoir: A Life Of Freedom, my analysis of the work of the great French feminist, came out of this Conference.

My book on Simone de Beauvoir led to Between Women, a collection of essays I co-edited with Sara Ruddick and Louise De Salvo. The essays were by women biographers, novelists, critics, teachers and artists whose work had focused on women, and who described their attempts to replace "objectivity" with their efforts at balance and durability.

In 1982, about to be remarried, I knew I had to give up the name I'd acquired with my first marriage. I didn't want either to assume my future husband's name or to return to my father's name. Although friends worried that I was losing an already substantial list of publications, I changed my name to Ascher, my mother's family name, and the name of a beloved uncle—a move I have never regretted.

Looking back, the several decades I spent in university institutes, studying racial and economic inequality in public education, were influenced by both my refugee background and my mother's activism.  I also wrote more personally and directly about the lingering effects of my refugee past during my early mornings, weekends and on vacations.

The Flood, first published in 1987, describes a fictionalized ten-year-old in a refugee family in Topeka in 1951, the year Oliver Brown sued the Topeka Board of Education, and the town was overrun by floods. The novel was revised and republished in 1995, when it was featured in a multi-school and college "Ethnicity in America" program in the North Country of New York State.

In 2007, I left New York City for the woods of northwest Connecticut. Having retired from my research job, I've been able to devote as much time and energy as I want to my own writing.  In 2008, I published a memoir, Afterimages.  Part I of the memoir rethinks from an adult's perspective what it was like to grow up in Kansas in the shadow of the Holocaust; Part II interweaves my description of a long stay in Vienna in which I discovered more about my father's life before his forced flight from Austria, with reflections on who he was to me.

In 2015, I published A Call From Spooner Street, a novel about the reconciliation of an adult daughter and her aging refugee father, a former German literature professor. This novel allowed me to heal a final wound left by my father's death through imagining a reconciliation I had never had with him.

In 2016, I curated A Chance for Fresh Air: Russian Jewish Immigrants in Ellsworth and Amenis, 1907 - 1940.  The three-room exhibit, which opened at the Sharon Historical Society, describes a group of thirty Russian Jewish families who tried to farm in the hills above Sharon. As with many such Jewish farming communities across the United States, Sharon's was made possible with funding from the great Belgian philanthropist, Baron Maurice de Hirsch, who hoped by turning Jews into farmers they could end anti-Semitism.

The exhibit drew unprecedented audiences and won the Award of Merit from the Connecticut Society of History Organizations. A Chance for Land and Fresh Air was installed as a permanent exhibit at Congregation Beth David Synagogue in Amenia, the synagogue built by the Jewish farmers, in 1918. With the generous support of Mr. Raymond Learsy, who thought the exhibit should be turned into a book,  I was able to publish A Chance For Land and Fresh Air in 2017. The book is currently in its second printing, and has won a CultureMAX award from the Northwest Connecticut Arts Council.

Having spent decades sure that I never again wanted to go to school, in 2015, I took two courses about inter-religious conflict and healing at Hartford Seminary, both taught by Professor Yehezkel Landau.  These courses awakened a long-standing interest in questions of faith, and in fall 2017 I began a two-year course in Spiritual Direction at Hebrew Union College.

These days, in addition to writing short pieces for local newspapers and magazines,  I give lectures on the Jewish farming movement and offer spiritual counseling.

I'm standing in room 2 of A CHANCE FOR FRESH AIR