Carol frequently writes on immigration in her column

A Chance for Land and Fresh Air

In 1907, the first of thirty Jewish families settled in the Ellsworth hills above Sharon to try their hand at dairy farming. Most of the immigrants purchased land with mortgage assistance from the Jewish Agricultural and Industrial Aid Society, funded by the Belgian Jewish philanthropist, Baron Maurice de Hirsch. The Russian Czar had forbidden Jews to farm, and Hirsch hoped that farming would enable Jews to become productive and fully-respected citizens in America. But the hills were too stony for dairy farming, and most families subsidized their incomes by taking in city Jews wanting kosher vacations in the fresh air.

In the 1920s, as their children reached high school age, the immigrants began moving down from the hills, many to Amenia, New York, a town directly on the train line, where the high school was more welcoming. These families built kosher boarding houses and small hotels, as well as a range of business, and by the end of the decade Amenia was a sufficiently busy resort town to support a synagogue.

Ascher’s draws her important and moving story of Jewish rural life in the early decades of the twentieth century from photos and interviews with such descendants as Epsteins, Gorkofskys, Marcuses, Osofskys, Paleys, Rothsteins and Temkins, as well as from land records, census data and other historical documents. Thanks to funding from Baron de Hirsch, similar settlements of Russian Jewish farmers took place in other rural communities in Connecticut, Massachusetts, New Jersey and New York, as well as throughout the United States and Canada.

“This book is not just about Ellsworth and Amenia, nor is it just about a dozen Russian immigrant families adjusting to America. It is about all immigrants who flee, arrive, and struggle to assimilate into a strange new land, learn a new language, take up an altogether new way of life.” - Norman Osofsky, descendant

“The detailed scholarship and memorable stories that make up this book offer today’s reader insight into the refugee experience and leave the reader inspired by these stories of struggle and achievement – Mary Donohue, author of Back to the Land: Jewish Farms and Resorts in Connecticut, 1890-1945

On Saturday, May 26th, 2018 I gave my talk and slide show on Jewish farmers in Sharon and Amenia at the Roeliff Jansen Community library in Hillsdale, New York. This little-known Jewish farming community was one of hundreds of such communities around the country in the first decades of the twentieth century, all made possible by mortgage loans from the Jewish Agricultural and Industrial Aid Society, a fund established by the wealthy Jewish philanthropist, Baron Maurice de Hirsch.  De Hirsch believed that, only by becoming farmers, would Jews be seen as productive members of society and so end anti-Semitism.

In the audience at Roeliff Jansen was a woman who had grown up in Woodbine, New Jersey, in some ways the premiere Jewish farming community, as it also contained the Woodbine Jewish Agricultural School, aimed at teaching the latest farming techniques to the sons of Jewish farmers.  She surprised and delighted me by reciting a Yiddish song, Hey Zhankoye, that she had learned from her farmer grandmother.

When the woman left the Library before I could get her to give me the words, I sent out a call on email and Facebook.  A couple of weeks later, I received an email from Alexia Lali, along with several links to the song.

READ THE FULL STORY WITH LINKS TO SONG, VIDEOS, AND LYRICS HERE ON A CHANCE FOR LAND AND FRESH AIR BLOG.

A Call From Spooner Street

Three generations of strong-minded Rosens have gone their own ways, keeping a safe distance from each other. When Peter Rosen, the octogenarian émigré professor, takes a bad fall in the snow, his estranged adult daughter Marlene begins flying regularly to Madison.

Long days on Spooner Street amidst her ailing father's beloved German books enable Marlene to let go of old bitterness and rekindle her love for him. When her son, Noah, returns from Africa for a last visit with his grandfather, he instigates a deeper honesty, love and forgiveness among all three Rosens.

"[A] superb novel, tender, wise, and beautifully crafted. I found myself reading more slowly as the end of this stunning novel was in sight, not wanting to leave its embrace." ~ Marnie Muller, author of The Climate of the Country

Award-winning essayist and fiction writer Ascher weaves a detailed, painstaking and generous tale of reconciliation among three generations. Elderly literature professor Peter Rosen, a cantankerous German émigré, is injured in an icy fall, and his estranged daughter Marlene is reluctantly called into service. Duty becomes something more textured and loving, with a gay Dominican homecare aide and Marlene's strong-willed biracial son adding drama and depth to the mix. ~ Chronogram

"A deftly crafted novel by a truly gifted author and one that will hold the reader's rapt attention from beginning to end." ~ Reviewer's Bookwatch

"Admittedly, seeing the words "death" and "holiday" in the same title can be a bit jarring. But the reality is that during this season of joy and love many people are dealing with either the approaching death of a loved one or grief over a loss that has already occurred. . . . A Call from Spooner Street by Carol Ascher is a good read for an adult child dealing with the death of an elderly parent." ~ Huffington Post

Ten-year-old Eva Hoffman’s family, Austrian refugees, have found precarious safety in Topeka, Kansas. It is 1951, the year of the landmark desegregation case. As the rising river inundates the town, the Hoffmans open their home to refugees from the flood, and Eva learns the complexities of prejudice—and courage—both within and outside her family.

A "richly evocative story of the awakening to adulthood, this novel demands slow and appreciative reading. Ascher should be applauded for writing what critic and novelist John Gardener once called 'moral fiction'." --Los Angeles Times

"I wish there were more books like Carol Ascher's—sensitively observed, full of affection and life, and . . . passionately concerned with crucial moral questions." 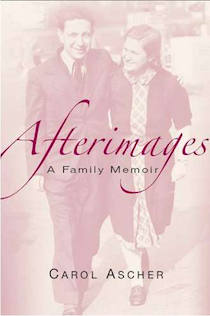 Born several weeks after my parents' arrival in the United States, I came of age in Topeka, Kansas, where my father, a lay analyst trained at Freud's Psychoanalytic Institute, found work among the group of refugee clinicians recruited by the Menninger Clinic. Growing up, my challenge was to reconcile the Midwestern views of my neighborhood and school; the irrepressible optimism of my mother and her tendency to romanticize her Berlin childhood; and the more sardonic views of my father and his highly cultured emigre circle, for whom memory was both illness and cure.

A long stay in Vienna allows me to understand more fully the world which formed my father and his parents, as well as to understand the brutal Nazi period which destroyed everything they had built and loved, and forced them to flee. I also visit the grave site of my grandfather, who died before he could get out.

This first major study of Simone de Beauvoir traces the course of de Beauvoir's personal and intellectual achievements, as well as her deep, lasting relationship with Sartre and other friends. Unlike many conventional biographers who approach their subject with personal detachment, this book explores how de Beauvoir's political and philosophical ideas have influenced much of contemporary thought. The woman portrayed here is a courageous, energetic one, full of contradictions and ambiguities, but always daring in her thinking.

"No other work in English attempts an analysis of the total person and of her essays and fiction... A scholarly yet readable work, this is essential for college and public libraries."

"Ascher successfully combines a critical biography of French writer Simone de Beauvoir with elements of a personal essay on what de Beauvoir means to her as a sort of feminist mentor-from-afar." ~ Booklist

"Ascher's deeply personal exploration of de Beauvoir's life and work should have strong appeal for feminists who, like the author, "are still trying to discover what we can be...." ~ Publishers Weekly

"Simone de Beauvoir: A Life of Freedom by Carol Ascher is a personal view of the woman who wrote "The Second Sex." Ascher discusses Beauvoir as a woman, as a thinker and as a role-model. She sees her as someone committed to freedom, in literature and in her 50-year-long alliance with Jean-Paul Sartre, yet Ascher is dismayed by her perceptions of Beauvoir's inconsistencies in that regard. A subjective and fascinating account of a woman, who may or may not be the authentic Beauvoir."  ~ Elizabeth WheelerLos Angeles Times, August 9, 1981

First published in 1984, Between Women provides groundbreaking analyses of women's writing about women. The compilation of stories includes biographers, novelists, scholars and artists, each writing about their respective creative processes. The contributors discuss how they chose their women subjects as well as the biases and hopes they brought with them and the discoveries they made. The Routledge edition also includes an introduction by Carolyn Heilbrun.

"Original, fascinating, important. There has never been a book like this, illuminating how creative dwelling and work on one's subject can alter, deepen, and transform not only the work but also the comprehensions and lives of the artist, writer, scholar. A wonderful and inexhaustible sourcebook for all those concerned with creation." ~ Tillie Olsen

"This is a wonderful book in breadth and variety: Yi-tsi Mei Feuerworker on Ding Ling, Bell Gale Chevigny on Margaret Fuller, and May Stevens on her mother and Rosa Luxemburg. Even the table of contents is a joy to consume. Between Women is a big read to be taken in chunks and dreamily digested." ~ Grace Paley